Bullying is behaviour that hurts someone else. It includes name calling, hitting, pushing, spreading rumours, threatening or undermining someone.

It can happen anywhere – at school, at home or online. It's usually repeated over a long period of time and can hurt a child both physically and emotionally.

Bullying can take different forms. It could include:

The following types of bullying are also hate crime:

There are many ways of bullying someone online and for some it can take shape in more ways than one. Some of the types of cyber bullying are:

More about cyber bullying can be found further down the page.

Look for changes in the child. However, be aware that not all children who are bullied exhibit warning signs.

Some signs that may point to a bullying problem are:

If you know someone in serious distress or danger, do not ignore the problem.

Kids may be bullying others if they:

The effects of bullying can last into adulthood. At its worst, bullying has driven children and young people to self-harm and even suicide.

Children who are bullied:

All children who are affected by bullying can suffer harm, whether they are bullied, they bully others or they witness bullying.

Any child can be bullied for any reason. If a child is seen as different in some way, or seen as an easy target they can be more at risk.

Or it could be because they:

Popular or successful children are also bullied, sometimes because others are jealous of them. Sometimes a child's family circumstance or home life can be a reason for someone bullying them.

Disabled children can experience bullying because they seem an easy target and less able to defend themselves.

Cyber bullying is rife on the internet and most young people will experience it or see it at some time. Cyber bullying can happen 24 hours a day, 7 days a week and it can go viral very fast.

There are many ways of bullying someone online and for some it can take shape in more ways than one. Some of the types of cyber bullying are:

Bullying by spreading rumours and gossip

The worst thing about social networking sites and messaging apps is that anything nasty posted about you can be seen by lots of people and these posts can go viral very fast and be shared by so many people within minutes in some cases.

From what we have heard from people who have been bullied online, the most vicious gossip and rumours are often spread by people who were once your best friends so it's best to keep secrets and personal information to yourself. Only tell people things if it would not embarrass you if other people found out about them. Posting false and malicious things about people on the internet can be classed as harassment.

Anyone who makes threats to you on the internet could be committing a criminal offence. It is against the law in the UK to use the phone system, which includes the internet, to cause alarm or distress. It could also be against the 1997 Harassment Act (opens a new page). If threats are made against you then it's essential you confide in your parents, or someone you trust so that they can make a complaint to the police. If you ca not print out the threats use the "print screen" button or snipping tool to take a snapshot of the computer screen and then save that somewhere safe. Or if you have a phone or tablet, use the screenshot function and keep these images safe.

We have had many complaints from young people that new "friends" online have tried to pressure them into taking their clothes off and filming or taking images of themselves. Threats have been made that their parent will be told embarrassing things if they do not take part or they will send the images to everyone they know if they do not do it.

This is an offence called "grooming" in the UK and people who have been found guilty of "grooming" have been jailed. Remember: everyone you meet on the internet is a stranger and you need to keep personal things personal to you, don't share your secrets with other people and if anyone asks you to do anything that makes you feel uncomfortable then do not do it.

When comments gets abusive

There are quite a few instant messaging apps including Snapchat, WhatsApp, Secret, Whisper and Instagram.  They are a great way of sharing things with your friends and having fun. But if things turn nasty you can block people from seeing you are on line and you can save abusive conversations or print them out as evidence.

It is tempting to have a go back if someone makes a rude posting on your online space, social network or app but do not. This is called flaming and it just makes the problem worse. Abusive comments are very upsetting but the best way to deal with them is to get them removed by the website.

It is easy to save any pictures of anyone on any site and upload them to the internet. Make sure that you have the person's permission to take a picture and that they are happy for thousands of people to see it on the internet. Be wary of tagging and hashtags as this will send the picture out to a wider audience then you may have originally intended.

Do not upset people and then upload their pictures for other people to have a laugh. That could be harassment. Do not digitally alter pictures of people either because what you think is funny may be offensive to other people. Do not let anyone take pictures of you that might embarrass you.

There is no such thing as an innocent bystander and if you have seen someone being bullied online, you can report it to the online site or app. Ignoring it may feel like the easiest thing to do but the person who is being subjected to that bullying may need your help and support to get it stopped. Most sites now have a report button which is something you can do and this will send the bullying comments to the site to investigate. 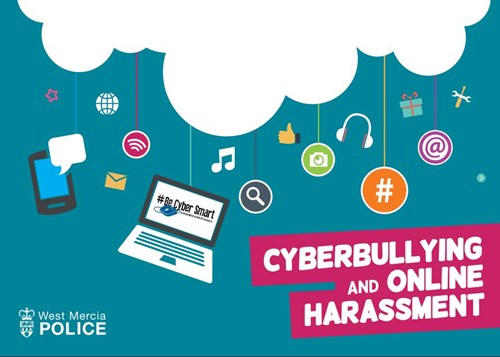 West Mercia Police have also put together a guide on cyber bullying (opens a new page).

Previous What if you are worried about a child? Next Letting people know you may need help (including the Hidden Disabilities Sunflower scheme)
Last updated: 14/12/2021