What is an EHCP?

An EHCP is a legal document which describes the special needs and disabilities (SEND) of a young person (from 0 – 25) as well as what help they need in an educational setting to help them make progress and learn. They are for young people who have complex additional or special needs (SEND)and need more help in an educational setting than most children or young people.

These special educational needs may have been identified by the educational setting or other professionals working with the child or young person. EHCP’s are for children and young people who are of compulsory school age and are in an educational setting, up to higher education level (EHCP’s do not apply to young people at university, they have their own support systems in place).

An educational setting can include a school, a maintained nursery or college

Educational settings are responsible for providing support for children with SEND, if the educational setting has gradually increased the amount of support being put in place and carrying out regular reviews to see if progress is being made and can demonstrate that further support is needed – this is called the graduated approach, more information about this can be found in the SEN Support page (opens in a new window) then they, or you can apply for an EHCP.

Each Local Authority has created it's own version of an EHCP, they all contain the same sections but they look different.

Below is a blank Kirklees EHCP, this can be downloaded by clicking on the image or clicking the link below. 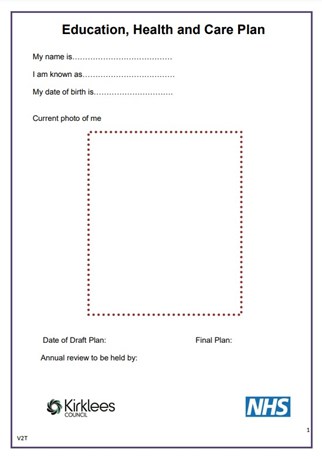 Please see our How to apply for an EHCP assessment

What is in an EHCP?

An EHCP Contains a number of sections (A - K) , they are designed to make sure that any additional support or provision provided is linked back to the young person's aspirations, taking into account their special needs and specific yearly and longer-term outcomes. 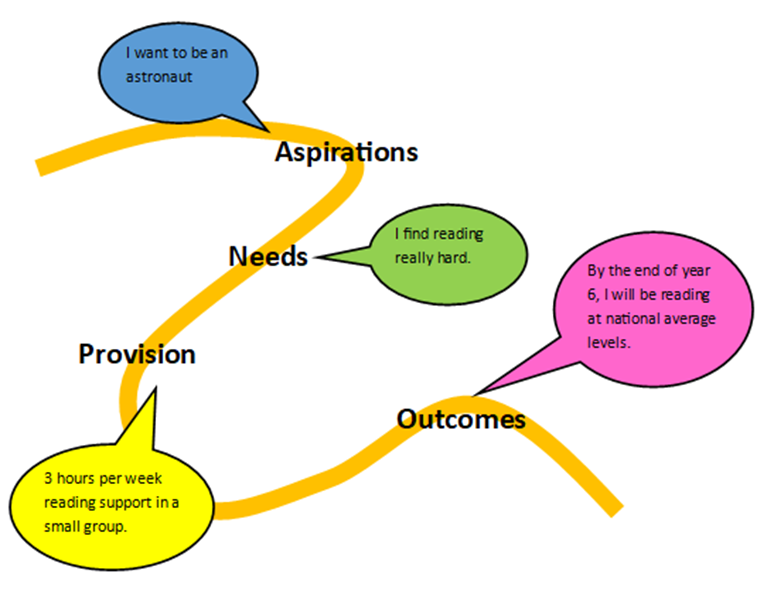 For example here the young person wants to be an astronaut (aspirations or goals) but they find reading difficult, which you need to be able to do to be an astronaut (needs), so they will be provided with 3 hours literacy support in a small group each week (provision) which will help them to meet the outcome of being able to reading at national average levels at the end of year 6. This can be linked back to wanting to be an astronaut.

This type of approach is called Person Centred Planning, which basically means that the EHCP is a plan that is focused on the young person it is about and needs to think about what that young person actually wants.

This video can help to explain how this works.

This section is all about the views of the young person and the parent/carer. This is quite a long section and has a lot of questions about the young person, including their aspirations. This is also where parents and carers can express their thoughts and tell the young person's story. It is really important to take time to complete this whole section fully.

This is the part where the special educational needs of the young person are described in detail.   The information for this section comes from that the reports that that various professionals have written as part of the EHC assessment. This is split up into the following parts:

This part contains information about any health needs identified through the EHC assessment which are related to the child or young person's SEN. Some health care needs, such as routine dental health needs, are unlikely to be related.

This section contains the long term outcomes, these are outcomes usually recommended by whoever has been involved in the EHC assessment (such as EP, speech and language therapists etc).  They have to be linked to the child or young person's aspirations.  It is important that all involved agree on these outcomes.

This part contains all the provision or additional support the child or young person requires in order to meet the agreed outcomes.  It will detail exactly what needs to happen, who will do it, how often it will happen and for how long.

This part contains all the provision related to the child or young person's SEN that are being provided by health professionals.

This is where the educational setting where the child or young person is attending is named.

This is split into K1, K2 and K3.  It contains information about person details, which professionals from education, health and social care are agreeing to the plan and information about all the documents which have been used to created the EHCP.

What if you don't agree?

The council work hard to include young people's & parents/carers ideas and views in a plan and give opportunities for changes to be made.  When a new or Amended EHCP is produced, an opportunity is always provided to consider changes.  The LA will send out a Draft EHCP (for new assessments) or a Proposed Amended (for existing EHCP's).  This is your opportunity to comment on what is in the plan and suggest changes.

If once an EHCP is written (or finalised) and you or the young people when over 16 if they want to make that decision alone, don't agree, you can appeal about what it says in an EHCP.

Details of how to raise an appeal will be contained in the letter that the LA sends out with the Final EHCP.

For places that can offer support and advice, please go to “Independent Support and Advice” (opens in a new window).